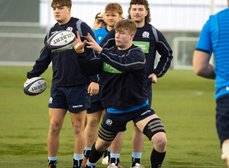 EURFC are delighted that first-year student Rob Gordon has been named in the Scotland U20s squad to take on Wales U20s on Friday night. (8pm)

Gordon has been a standout performer for the Fresh 1s this season and captained the side earlier in the season, before making his BUCS Super Rugby debut against Cardiff.

Having been involved in the Scotland training camp earlier in the season, Gordon now finally has an opportunity to show what he can do in a blue jersey.

“I’m very proud and looking forward to it,” he explained. “To play for your country is a great honour and is every rugby player’s dream.”

There are four changes to the starting team who hosted England last Friday night. Olujare Oguntibeju earns a starting place in the team at blindside flanker, with Mikey Jones coming into the front row. In the backs, scrum half Murray Redpath returns to the side, with Andy Stirrat set to make his first appearance for Scotland U20s at inside centre.

With Ollie Leatherbarrow not selected, Gordon is poised to make his debut off the bench, alongside Jonty Cope and Ali Rodgers.

Having played for the Fresh, the BUCS Super Rugby side and now being selected in the Scotland U20s side this season, Gordon took the time to highlight how much he had enjoyed the challenge of stepping up between teams this season.

“It’s has been a great opportunity to play for various teams at the university. The very high standard and competition for places have made the experience an exciting challenge and great fun to be a part of.”

Gordon is relishing the chance to see what he can do at age-group international level but was also full of praise for the environment at Exeter University, that has helped him continue to develop.

“I’ve loved every minute of it. The club atmosphere, with everyone pushing and helping me to constantly get better and do things outside of my comfort zone, is a big factor in aiding my development,” he noted. “Alongside all that. I couldn’t have asked for a better support system from everyone at the university, especially the coaches and S&C staff, who have helped me develop my game to a much higher level.”

Having suffered defeat at home to England last Friday, Head Coach Kenny Murray has challenged his side to improve upon their execution, when they make the trip to Colwyn Bay.

“Down in Wales we’ll be looking to stay in the fight, execute our plays more accurately and convert our chances into points when they come. If we do that, then I’m confident that the team can perform better than they did last week and get the result we want.”

All at EURFC wish Rob the very best of luck ahead of Friday’s match, with the game being shown live on BBC iPlayer.