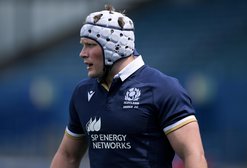 Exeter University student starts at 8 against England on Friday night.

Exeter University student Ollie Leatherbarrow has been named in the Scotland U20s matchday side, to take on England at the DAM Health Stadium on Friday. (8pm)

Leatherbarrow stared in last season’s tournament and having made 5 appearances for the U20s, he will be looking to take on a more senior role in the side. Leatherbarrow is one of 11 players in the matchday side who have previous experience, with his barnstorming performances from number 8 becoming a feature of his matches for both his country and the university.

Coming up against an English side that secured the Grand Slam last season, the pressure will be on for Scotland to secure a positive early result and put a marker down for the rest of the championship.

Ahead of the clash, Head Coach Kenny Murray was pleased with how his side have worked in the run-up to the tournament, highlighting the experience within his side.

“The team are in a really good place after working hard over the last few months. I’m really happy with the squad we’ve been able to select, 11 players have played in an international match of this level before, so they know what to expect.”

“It will be a really special night at the DAM Health Stadium on Friday as this group of players get to experience representing their country for the first time on home soil,” explained Murray. “A large crowd is expected so it should be a great atmosphere to open our campaign with.”

The match is being streamed live on BBC iPlayer on Friday, with kick-off at 8pm.

All at EURFC wish Ollie the best of luck ahead of what is sure to be a physical encounter.