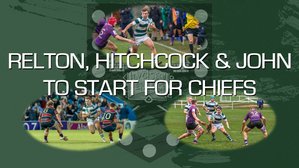 Relton, Hitchcock and John to Start for Chiefs

There will be a healthy EURFC contingent turning out for Exeter Chiefs in tomorrow’s Premiership Cup clash with Worcester, as Dan John, Arthur Relton and Tom Hitchcock are all selected to face the Warriors at Sandy Park.

EURFC players have formed a key part of the Exeter Chiefs cup squads this season, further highlighting the strength of the relationship between Chiefs and the university and John, Relton and Hitchcock will all be looking to make their mark tomorrow afternoon.

Whilst John and Relton are no strangers to the Chiefs jersey, having made three and two appearances respectively, for Hitchcock, it will be his first time in a Chiefs shirt after impressing the Exeter coaching staff with his performances in the BUCS Super Rugby side this season.

Reacting to the news of his first appearance in a Chiefs shirt, Hitchcock admitted that he was “absolutely thrilled!”

“We’ve had a great week of training and I’ve thoroughly enjoyed being in the professional environment. The players have all been very welcoming and made fitting into the team very easy. The professionalism of the EURFC programme has also made going into Chiefs that much smoother.”

The physical centre has made 16 appearances for EURFC this season in BUCS Super Rugby, becoming a crucial cog in Exeter’s well-oiled machine.

Hitchcock credits the league and his time involved with the university rugby programme thus far in aiding his development as a player.

“BUCS Super Rugby and the University of Exeter rugby programme have both been paramount to my development this year, with every game being a tough encounter,” he explained. “The league really tests your mental and physical toughness each week and it’s been great being part of EURFC this season. I’m hopeful the boys can really push on in the knock stages.”

With the Chiefs admitting that the shackles are off ahead of this one, Hitchcock, Relton and John will be looking to stretch their legs and put in strong performances, as the Chiefs look to end their Premiership Cup campaign on a high.